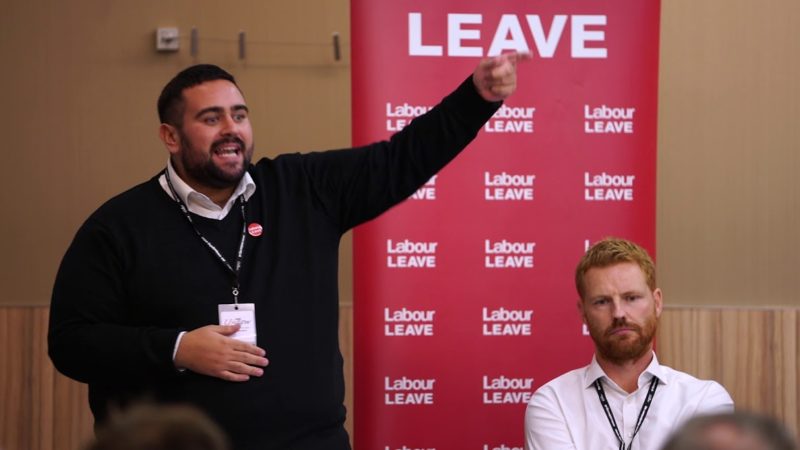 In a LabourList article last week, Clive Lewis described our leaving the European Union as a “hard-right Tory project”. It is important to make one thing abundantly clear: there is no such thing as a hard-right Tory Brexit. There is just leaving the EU. A decision made in a democratic and free referendum in which a majority of people – 17.4 million – voted to leave the EU is not an expression of hard-right politics, however convenient it is for Labour Remainers to smear it in this way.

Nor is it a “descent into authoritarianism” – at least not from the Leave side. Some Remain supporters, on the other hand, have begun throwing things at their political opponents, asking for their opponents to be imprisoned, trying to shut down Leave rallies, and campaigning to simply veto a referendum result and revoke Article 50. It is Leavers, not Remainers, who fear for their jobs if they express their position. Recently, Fire Brigade Union official Paul Embery was sacked for attending a cross-party Leave means Leave rally.

The referendum was neither left nor right. It cut through traditional party tribes and boundaries, with both traditional diehard Labour and Tory voters endorsing the same message – Leave and take back control.

The politics of the hard right is an anti-democratic politics. All regimes that have existed through history on both the extreme right and the extreme left have denied people the right to participate in democratic institutions. People are denied the right to protest, imprisoned and in some cases tortured and murdered. Language is important in politics and to be so frivolous in the use of the expression ‘hard right’ and even ‘fascist’, as Labour MEP Julie Ward has recently done, is irresponsible, divisive and trivialises the real suffering of civil and political rights campaigners all over the world.

Many issues fuelled both the Leave and Remain campaigns during the referendum. But to suggest that a ‘far-right nationalism’ fuelled the Leave campaign is simply nonsense. Different people had different reasons for voting Leave. But they were motivated, if anything, by sovereignty first and foremost, as polling has shown. It was also a rejection of an ultra-liberalised economics, locked down by treaty, which has transformed European people into a mere commodity to be shunted around the continent at the whims of capital. It was a rejection of institutions that were different in their structure to British institutions, and most importantly of all, that were undemocratic.

If anything, the vote to Leave was a rejection of the new right in politics, a rejection of unaccountable and remote power guided by commercial (and particularly financial) interests – not an endorsement of the hard right. It is worth remembering which side was backed and funded by the global investment banks – it wasn’t Leave.

Lewis suggests that Labour MPs who voted to keep ‘no deal’ on the table were shameful to do so. But it is a tactical error to remove your strongest card in any negotiation. What trade unionist would enter into a negotiation with an employer and declare themselves against strike action from the outset, regardless of the conditions imposed upon them? Such a move would enable an employer to dictate the terms of any negotiation and ultimately result in an unfavourable settlement for workers.

In the same vein, to remove our ultimate card from the table at the outset will inevitably conclude with the UK receiving less favourable terms – exactly as Theresa May’s appalling deal demonstrated. Those eight Labour MPs who voted against the business motion last week, and those who abstained, were being sensible and pragmatic.

Legislation enacted determines that the UK is due to leave the EU on October 31st. The House of Commons voted for this, knowing full well that if an agreement had not been reached by this point then the default position would be to leave without a deal and to negotiate as an independent state. As someone who was involved at the very early stages of the last referendum, I can say with authority that there simply is not the time to hold a second referendum between now and October. The only way this could be achieved is by revoking Article 50 or seeking a year-long extension. Labour opposes both of these options.

Labour MPs are in a difficult position. While an overwhelming majority of Labour MPs backed remain, 70% of them represent seats with strong Leave majorities. As a party, we promised to accept the outcome of the referendum and leave the EU. In 2017, we were able to deprive the Tories of a majority on that basis. Labour should be focussed on bringing our country together and further developing our radical policies to improve this country for the many, not seeking to further entrench divisions through a second referendum. It is depressing that Labour is even entertaining the idea of simply rejecting a referendum result – though for the EU, it’s a sadly familiar story.

Brendan Chilton is director of Labour Future and a councillor in Ashford.

View all articles by Brendan Chilton