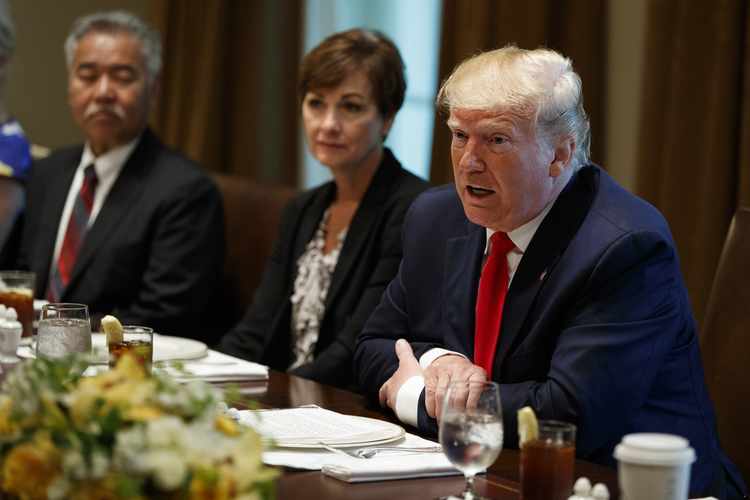 The selective outrage from the left surrounding foreign interference in U.S. elections is beyond hypocritical — it’s absurd.

Take President Trump’s interview with ABC’s George Stephanopoulos on Wednesday. When asked by the TV anchor if his campaign would accept information from foreign nations, including China or Russia, that could damage his opponent, Trump said, “I think you might want to listen. There’s nothing wrong with listening.” He continued. “If somebody called from a country, Norway — ‘We have information on your opponent’ — oh, I think I’d want to hear it.”

The president downplayed the notion that such a gesture amounts to foreign election interference.

The response, however, from scores of Democratic presidential hopefuls was piercing. They excoriated Trump’s comments, with several candidates amplifying calls for impeachment. Frontrunner Joe Biden tweeted: “President Trump is once again welcoming foreign interference in our elections. This isn’t about politics. It is a threat to our national security. An American President should not seek their aid and abet those who seek to undermine democracy.”

Sen. Bernie Sanders said, “We have a president who thinks he is above the law. The House should immediately begin impeachment inquiries.”

California Sen. Kamala Harris said on MSNBC, “what we hear tonight is that he is yet again open to the idea of working with foreign governments to undermine the integrity of our election system. It’s outrageous.”

Sen. Elizabeth Warren also reiterated calls for impeachment while other 2020 Democratic candidates including Beto O’Rourke tweeted, “When the President of the United States openly welcomes foreign help to win an election, he threatens the very core of our democracy. If we are to secure justice and ensure this never happens again, we must impeach him.”

Many other prominent Democrats, lawmakers and biased media made similar utterances.

Of course, there was no such outrage from the left or the #FakeNewsMedia when the Democratic National Committee and Hillary Clinton’s 2016 presidential campaign paid millions for Russian disinformation against Donald Trump. Former British spy Christopher Steele procured the propaganda from foreign “informants” for what’s known as the “dirty dossier.” That foreign-sourced opposition research wasn’t just obtained and listened to by Team Hillary. It was used by former FBI Director James Comey, Democratic lawmakers and the highest echelons of the justice system to derail the Trump campaign and current administration via counterintelligence investigations and other underhanded tactics.

Then there’s former President Barack Obama’s Department of Justice, which used the foreign-sourced dossier — despite it being unverified and salacious, per James Comey — to obtain FISA warrants to spy on the Trump campaign and launch several ongoing investigations into the administration.

Democrats aren’t bothered by any of that, as they only care about foreign meddling in our democracy and elections when it hurts them politically. When it benefits them, however, they look the other way.

Then there’s the high-paid DNC contractor Alexandra Chalupa who, as Politico reported in 2017, sought dirt on Paul Manafort from the Ukrainian government to harm Trump’s 2016 campaign — and help Hillary Clinton. Politico said: “Ukrainian government officials tried to help Hillary Clinton and undermine Trump by publicly questioning his fitness for office. They also disseminated documents implicating a top Trump aide … And they helped Clinton’s allies research damaging information on Trump and his advisors.”

Any outrage from the left? Not even a smidgen.

Then there’s Trump nemesis Rep. Adam Schiff, a ranking Democrat on the House Intelligence Committee who is laser-focused on investigating the president and removing him from office — at any cost. Democrats’ feathers weren’t ruffled in 2017 when Schiff solicited dirt on Trump from Russians, who offered nude photos of Trump.

But when Trump says he’d listen to information from a foreign government — not necessarily act on it — or inform the FBI, the left goes ballistic, illustrating how morally bankrupt and ethically challenged Democrats have become in their unbridled quest for power.