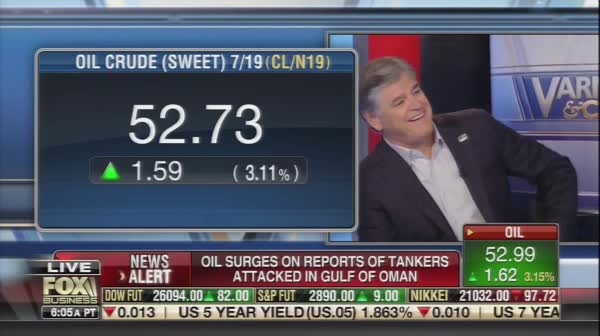 Sean Hannity is the go-to for Donald Trump when he is in a situation where he needs friendly spin, whether it’s his felonious statements made to George Stephanopoulis or the collapse of the North Korean talks with Kim Jong-Un. But it goes beyond friendly spin: Hannity is weaving the fabric of history with fool’s gold and propaganda.

After Trump’s disastrous interview with GSteph, where he invited the Russians, China, Saudi Arabia or anyone with dirt on his opponents to come and play in the 2020 sandbox, Sean Hannity popped up on Fox and Friends and then surprisingly on Fox Business (to Stuart Varney’s eternal relief) to spin away the pain.

It’s just “jiu-jitsu” don’t you know? Hannity is there to reassure all the Trump cultists glued to Fox Business that all is well, Trump is playing multi-level chess, and he didn’t really say what he said but instead meant it in an entirely different way, one that only Sean Hannity can interpret.

If this was the only time this happened, we might be able to overlook it, but it happens all the time.

When Donald Trump called upon Fox News host and confidant Sean Hannity to ask a question during his Hanoi press conference after the North Korean talks broke down, it was seen by many as a very odd move, but after further review it appears that it was a staged event to help mitigate Trump’s apparent foreign policy disaster.

After the talks with the North Koreans collapsed, Trump held an early press conference and in the dawn of a new day in America, Sean Hannity was called upon by Trump to address the press conference.

Hannity asked, “We have some history, President Reagan walked away in Reykjavik, a lot of condemnation at the time and it ended up working out very well in the end for the United State. Was this mostly your decision or and what message would you want to send Chairman Kim as he’s listening to this press conference about the future in your relationship?”

Reykjavik? Where did that come from? In no other instance had Reagan and Gorbachev been brought up as an analogy to the Trump versus Kim Korean Summit events.

Trump refused to definitively say at that moment if he was the one to walk away from the meetings so he could continue building a strong relationship with Kim but later intimated that he walked from the deal.

“Sometimes you have to walk, he said. “This was just one of those times.”

The next day the North Koreans said they were the ones to cut off the talks with the U.S., but that received virtually no coverage at all.

At first, Hannity’s analogy of Ronald Reagan walking away from Reykjavik in 1986 seemed like a typical defense of Trump’s failure by a super-surrogate but what happened afterwards indicates a much more calculated move.

At the time many in the media focused on the choice of Hannity as a questioner rather than what he asked because as Politico reported, all of Fox News regular journalists were there including White House press correspondent John Roberts. However, they were denied an interview with Trump. That is, all of them with one exception: Sean Hannity.

The following day after Sean’s “Reykjavik,” Trump was credited with being a brilliant tactician and the one to walk away, showing his skills as a supreme negotiator instead of the truth and in essence that became the media narrative moving forward.

This was happening the day after Michael Cohen’s damaging testimony against Donald Trump and the Trump administration looked desperate to have some sort of a win with the NOKO Summit failure, and making it appear that Trump was the grown-up in charge who put a possible future win first could work just as well.

After the revelation that Fox News had been assisting Trump administration officials with their on-air interviews preparation, I became very suspicious that the Reykjavik question was no accident.

On The 700 Club, Pat Robertson began discussing the collapsed talks with North Korea and Robertson asked his audience if they remembered Reykjavik. He compared Trump to Reagan just like Hannity.

Two days after the Hannity question, I found many TV and print pundits and journalists were comparing North Korea to Russia from the Cold War and Kim Jong-un, a murderous thug allowing his country to be strangled by economic sanctions. Somehow a tiny country with a population of roughly 25 million people and no nuclear arsenal to speak of was compared to the Soviet Union with almost 280 million people and thousands of nukes pointing in our direction.

It is no secret that Trump and Hannity talk on a regular basis and it appears to me this whole exercise was deliberate, just as Hannity’s appearance on Fox Business was. If true, this is a much more savvy and malicious use of propaganda than just giving Trump advice or scripting a televised interview or promoting his policies religiously.

The ministry of propaganda would be proud.

The Hannity Events remind me of the time when Roger Ailes set up Dan Rather to make George H Bush look tough, only this was much, much worse.

Questions should be asked about this. Serious questions. Even though Trump surrogates defending him on television appear to be part of an email list that shoots out coordinated talking points throughout the day, this is on a different and far worse level of disinformation.

Staging questions to trigger the echo chamber in order to spin up Trump’s legend is pure state-sponsored propaganda.

Karoli Kuns contributed to this article