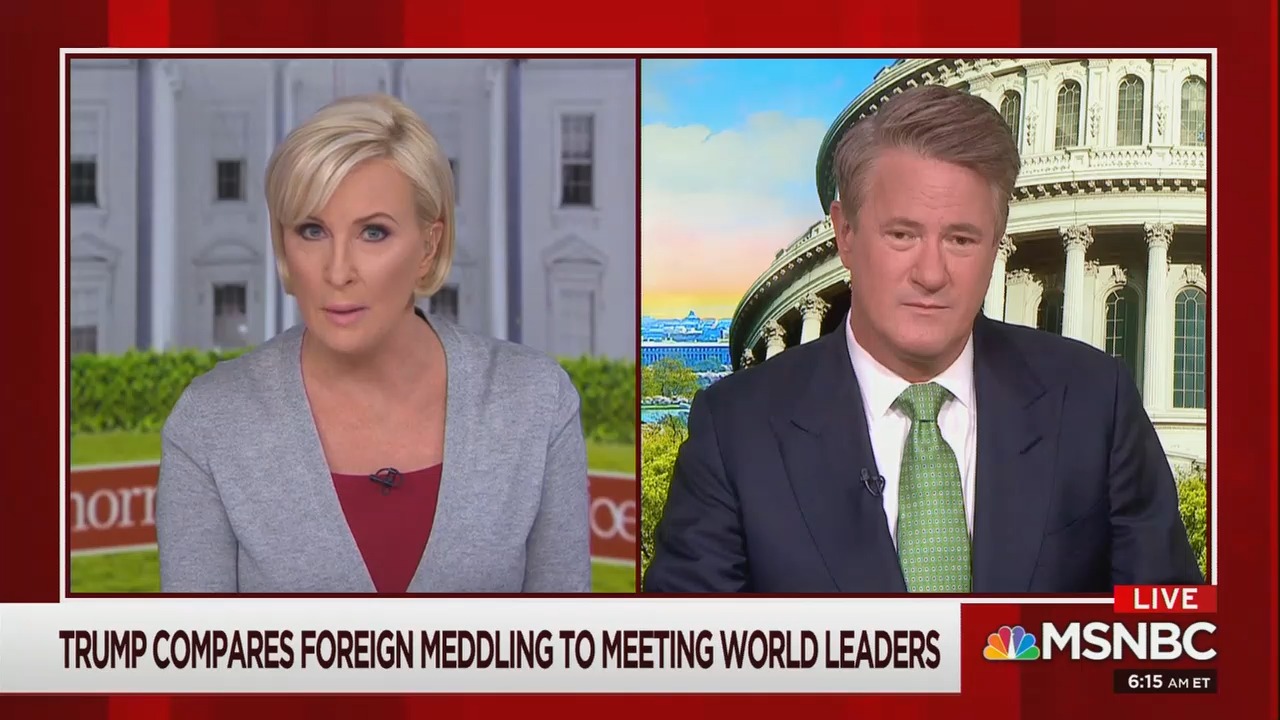 Joe Scarborough was once the most pro-Trump cable news host on cable television.  Now, his crusade against every action of the Trump Administration has turned him into a compulsive liar. On Friday’s Morning Joe, Scarborough added to his laundry list of lies by claiming that Hillary Clinton never received information about her political opponents from overseas:

MIKA BRZEZINSKI: … Joe, wow, Republicans were really avoiding things yesterday, except for one, but must of them were like tippy, tippy, tippy, tippy toe around something that is so obviously abominable.

JOE SCARBOROUGH: Well, you know I said yesterday that the Republicans had a choice. They could choose loyalty to their country or loyalty to Donald Trump and sadly, most–

SCARBOROUGH: — of those Republicans chose loyalty to Donald Trump and some of the things that were said and we’ll get to it in a minute but by Mitch McConnell were just absolutely extraordinarily — would be extraordinary but Mitch McConnell has proven — proved long ago he’s so cynical that what most of us consider — what most conservatives have long considered to be in the best interest of the country is not something that concerns Mitch McConnell at all. And, you know, there is also — there was this remarkable attempt by Republicans to lie again about Hillary Clinton saying, well, yes, Donald Trump said he might get information from the Iranians or the Chinese or the Russians or from foreign governments to try to influence democracy, but Hillary Clinton did it too. That’s just obviously a lie. I expect unfortunately too many Republicans on Capitol Hill to spread those lies. Some friends of mine that I follow on Twitter were doing the same thing yesterday. I think, Mika, they probably were just ill informed and that’s why we’re here. Let’s give them the facts right now.

This is simply not true. In November 2017, the Wall Street Journal reported that the infamous Trump dossier, gathered using Kremlin sources and authored by former British MI-6 agent Christopher Steele, was paid for by the Clinton campaign and Democratic National Committee. Hillary Clinton herself later endorsed her Russian-sourced dossier on the Daily Show , saying that “it’s part of what happens on a campaign,” essentially taking the same position that Trump did in his recent Oval Office interview with George Stephanopoulos.

Using foreign sources for opposition research is immoral no matter who does it, but the constant dishonesty and double standards that come out of the media regarding foreign influence in American elections is astounding.