This is not a race of party rebels. 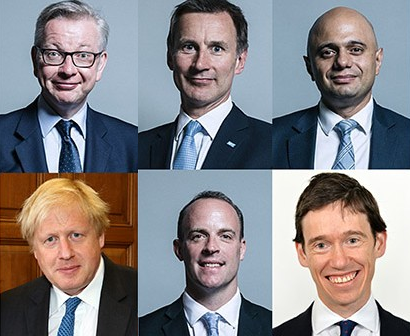 Following Matt Hancock’s withdrawal, just six candidates remain in the running to be the next Tory leader and Prime Minister of the UK.

The hopefuls have begun to release policy pledges in a bid to drum up support from fellow MPs – most notably (at least according to the news cycle), Boris Johnson’s proposed £10billion tax cut for the wealthiest individuals.

Infighting is never far beneath the surface of the Conservative Party, and with Johnson the clear bookies’ favourite, candidates from Jeremy Hunt to Michael Gove to Dominic Raab have been lining up to attack him while trying to differentiate their own platforms from the field.

But a closer look at their voting records reveals that the remaining candidates have lined up very closely on most key issues.

They Work For You, a site run by apolitical charity mySociety which presents open UK Parliament data in plain language, reveals that all the six (and indeed previously-10) candidates vote along party lines on ‘the vast majority of issues’. (It should be noted that many of the candidates have held ministerial roles, making it harder to rebel).

All candidates generally voted against laws aimed to promote equality and human rights. Dominic Raab and Andrew Leadsom in particular have ‘almost always’ voted against these.

True to the Conservative whip, all candidates generally voted against measures aimed at preventing climate change. Boris Johnson in particular has ‘almost always’ voted against pro-climate policies, perhaps in keeping with his previous sceptical comments on climate change.

A key divide reflected in the voting records is on fracking. Johnson has voted against greater regulation of fracking, a controversial technique only supported by 12% of the public, as have Jeremy Hunt, Rory Stewart, and former candidates Esther McVey and Mark Harper. But Michael Gove and Sajid Javid have mixed voting records on the issue.

Perhaps unsurprisingly given their party, all candidates have generally voted against EU membership. The differences are of degree: given their roles in the Leave campaign, Boris Johnson, Michael Gove, Dominic Raab and Andrew Leadsom (who is no longer in the race) have all ‘almost always’ voted against UK membership of the EU. The ex-candidate Esther McVey appears to be the most fervent of the Eurosceptics by voting record. Despite campaigning to Remain, former candidate Mark Harper also voted strongly against EU membership.

Lower taxes for the richest

Again in line with Tory policy, all candidates have generally voted against increasing income tax for those earning over £150,000. Ex-candidates Andrea Leadsom, Esther McVey and Mark Harper were the most consistent, voting 35 times against an increase for the highest earners over three years. Johnson, who was out of Parliament from 2008-2015 (as Mayor of London), was not there for the 12 votes on this issue – although his pledges on tax speak for themselves.

All candidates voted repeatedly – as did their party as a whole – to reduce the rate of corporation tax. The UK already has one of the lowest corporate tax rates of all developed nations.

All candidates have generally backed government policies ‘reforming’ the NHS, so that services are bought on behalf of patients, and creating an internal market which costs the NHS up to £10billion a year by some estimates. No candidate voted against these plans at any point – although again, Boris Johnson has not participated in any of the seven votes on the issue (mostly occurring during the coalition, when he was out of Parliament).

All candidates have generally voted against higher benefits for those unable to work due to illness or disability – and all except absent-as-Mayor Boris Johnson voted against raising payments at least in line with prices, meaning benefits are essentially cut every year. As Mayor, Johnson managed to avoid all 18 votes on the ‘bedroom tax’ (reducing housing benefit for social tenants deemed to have ‘excess bedrooms’), while all other candidates voted in favour.

When viewing a table of major issues since 2010, it is clear that whatever they may claim during the month-long campaign to become leader, this is not a race of rebels, but of ideological partisans.

The candidates may be singing different tunes for now, but come 22nd July we will see they are just slightly different shades of loyal blue.

Sam Peters writes on political, social and environmental issues, including for Jericho Online, Japan Today and the Green Party.

3 Responses to “Loyalists or rebels? How the leadership candidates line up on key issues”