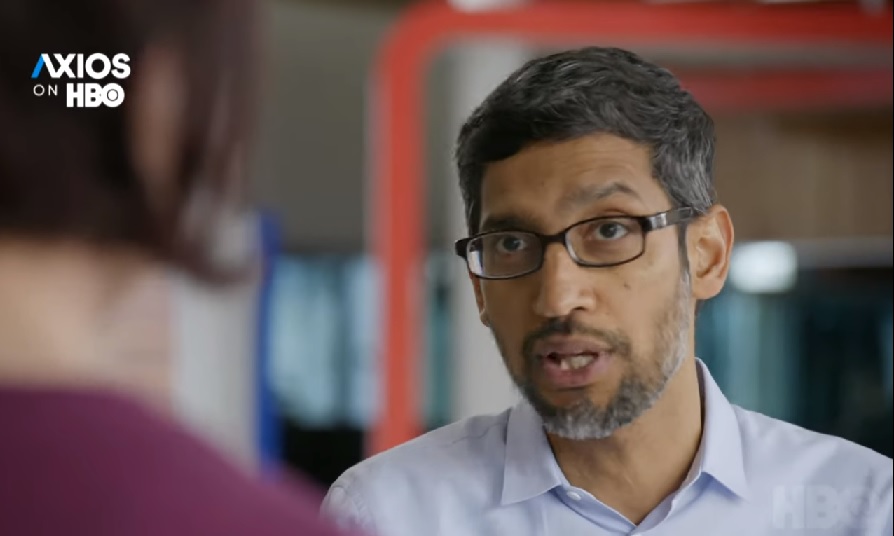 It’s starting to look like the recent demonetization of Steven Crowder’s Louder With Crowder YouTube channel, despite the admission by YouTube a day earlier that his channel did not violate their policies, was used as an excuse to institute an already planned crackdown on free speech on that platform. Who is the source for this information about a crackdown? Why, the CEO of Google himself, Sundar Pichai, who announced such a crackdown during an Axios on HBO interview broadcast on Sunday but it was recorded BEFORE the demonetization of Crowder’s channel.

Here is Pichai announcing in advance the crackdown on YouTube speech to Ina Fried of Axios:

None of us want harmful content on our platforms. I think last quarter alone we removed nine million videos from the platform. More recently we have introduced you know just like today we do this in search. We, you know, we rank content based on quality. And so we are bringing that same notion and approach to YouTube, so that we can rank higher quality stuff better and really prevent borderline content.

Content which doesn’t exactly violate policies, which need to be removed, but which can still cause harm. And so we are working hard. It’s a hard computer science problem. It’s also a hard societal problem because we need better frameworks around what is hate speech, what’s not, and how do we as a company make those decisions at scale, and get it right without making mistakes.

So basically any speech that anyone claims to be at all offensive can be punished by the YouTube despite not violating policies. It has already happened to Crowder’s channel for just that reason. In that case, “getting it right” was apparently agreeing with the left-wing mobs that try to take conservative content down or demonetize it. “Getting it right” is lining up with America’s manufacturers of “conventional wisdom.”

Look we aren’t quite where we want to be. But I think it’s a genuinely hard problem of how do you, YouTube has the scale of the entire Internet. And I think we’re making a lot of progress, but the thing we are trying to do is to bring more authoritative sources and fact checks on videos, which may be controversial. It’s a case where we got it wrong, but that’s what we are trying to do and we are working hard to improve.

Under pressure from the “mainstream media,” YouTube is seeking to add liberal “quality control” to the mix, trying to identify the “authoritative sources” [the Old Media brands] and “fact checks” [based on what liberals define as facts, which are often merely their opinions.

If there is anywhere in this interview in which Pichai promotes or praises free speech in any way, I haven’t found it. His shtick seems to be all about stifling free speech because somebody somewhere out there might be offended by its content.